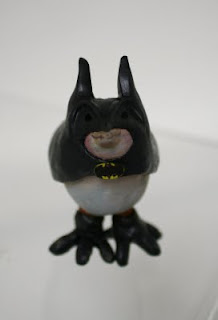 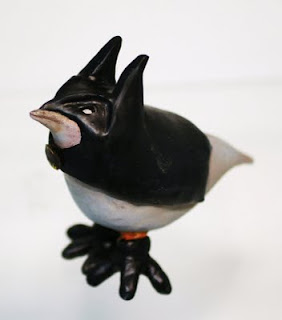 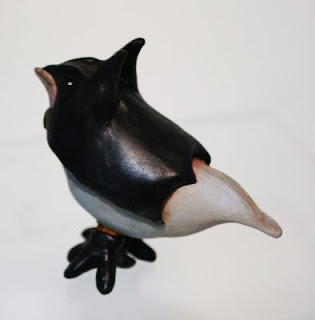 I had a vision and instead of coming to my senses – I ran with it. A clay bird I made needed a Batman Cape. From here it goes a little sideways…

I got a new Toy – I mean tool – a mini compressor. First I played with Copic markers and painted the bird a soft blue. OMG! This was so cool! Next, using a picture of George Cluney in his batman suit, I used Super Sculpy III in black to sculpt a Batman cape on the bisque bird. The clay removed the Copic marker – not a big deal. Legs/feet were made with wire. The feet were covered in the black Sculpy and the legs with paper clay. The sculpy clay was baked on the bird and wire feet for 15 minutes at 275 degrees.

After baking, the body was painted with acrylic paint and all pieces were sprayed with a matte fixative. I highlighted the body and legs with distress inks and glued the legs to the body. The bird was sprayed one last time with a matte sealer.

He is 5″ from beak to tail and 4″ tall and makes me smile everytime I see him.